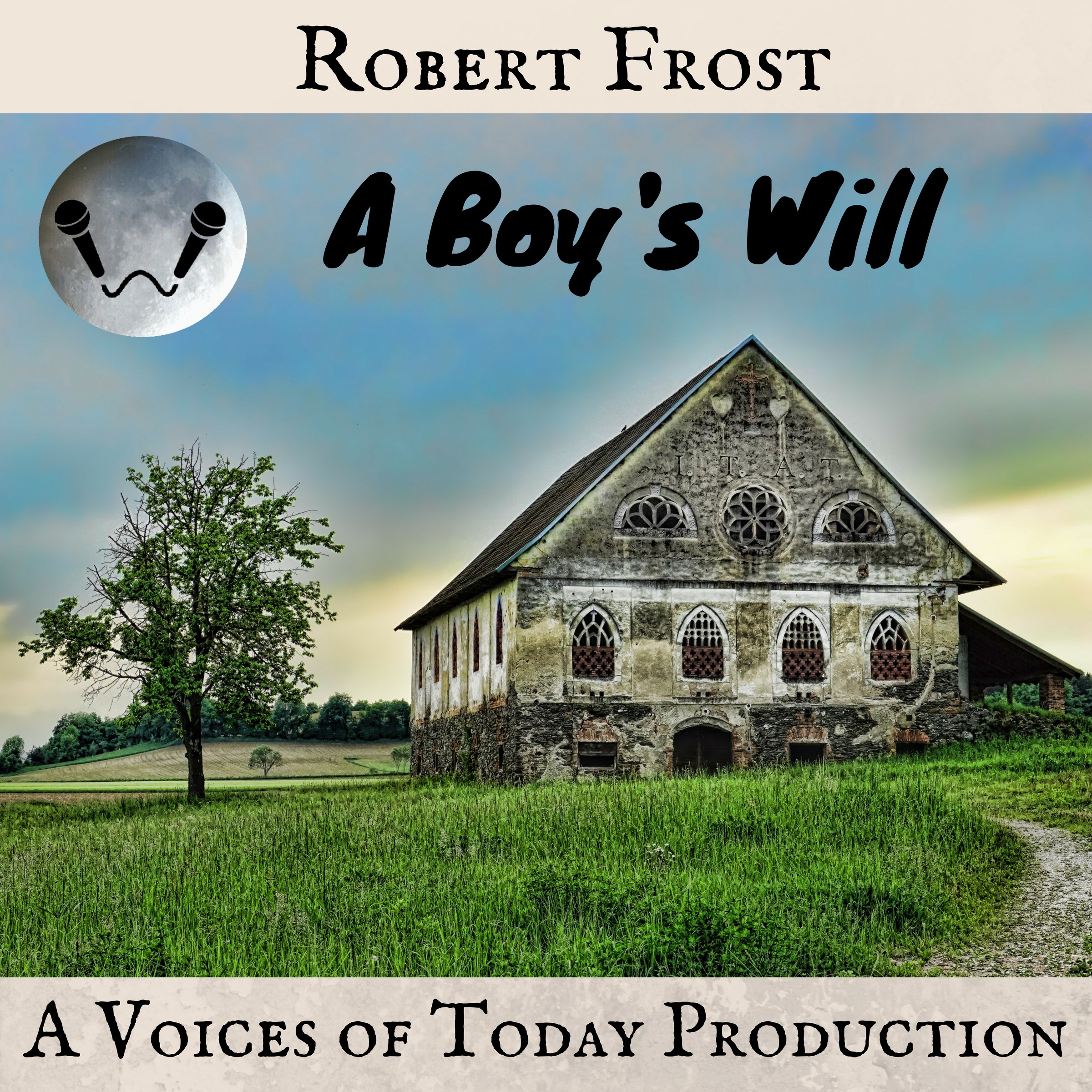 A Boy’s Will
By Robert Frost
Presented by Voices of Today
This book of thirty-two short poems is the first collection of poems published by Robert Frost and first appeared in 1913.    It was followed shortly afterwards by further collections North of Boston (1914) and Mountain Interval (1916.)
The book was dedicated to Frost’s wife.
Featuring the voices of Ben Stevens, John Burlinson, Amanda Friday, Olivia Sundeen, LuAnn Drexler, Sarah Bacaller, Peter Tucker, Marty Krz, Chyanne Donnell, Jeff Moon, Graham Scott, Susan Iannucci, Ron Altman, Cate Barratt, Bob Gonzalez, P J Morgan, Alan Weyman, Jennifer Fournier, Erin Grassie, Marie Hoffman, Andy Harrington, Christianne Lupher, Michelle Marie, Denis Daly, Lee Ann Howlett, Chris Johnson and Peter Thomlinson.
CONTENTS
PART I
INTO MY OWN
The youth is persuaded that he will be rather more than less himself for having forsworn the world.
GHOST HOUSE
He is happy in society of his choosing.
MY NOVEMBER GUEST
He is in love with being misunderstood.
LOVE AND A QUESTION
He is in doubt whether to admit real trouble to a place beside the hearth with love.
A LATE WALK
He courts the autumnal mood.
STARS
There is no oversight of human affairs.
STORM FEAR
He is afraid of his own isolation.
WIND AND WINDOW FLOWER
Out of the winter things he fashions a story of modern love.
TO THE THAWING WIND
He calls on change through the violence of the elements.
A PRAYER IN SPRING
He discovers that the greatness of love lies not in forward-looking thoughts;
FLOWER-GATHERING
nor yet in any spur it may be to ambition.
ROSE POGONIAS
He is no dissenter from the ritualism of nature;
ASKING FOR ROSES
nor from the ritualism of youth which is make-believe.
WAITING - Afield at Dusk
He arrives at the turn of the year.
IN A VALE
Out of old longings he fashions a story.
A DREAM PANG
He is shown by a dream how really well it is with him.
IN NEGLECT
He is scornful of folk his scorn cannot reach.
THE VANTAGE POINT
And again scornful, but there is no one hurt.
MOWING
He takes up life simply with the small tasks.
GOING FOR WATER
PART II
REVELATION
He resolves to become intelligible, at least to himself, since there is no help else;
THE TRIAL BY EXISTENCE
and to know definitely what he thinks about the soul;
IN EQUAL SACRIFICE
about love;
THE TUFT OF FLOWERS
about fellowship;
SPOILS OF THE DEAD
about death;
PAN WITH US
about art (his own);
THE DEMIURGE'S LAUGH
about science.
PART III
NOW CLOSE THE WINDOWS
It is time to make an end of speaking.
A LINE-STORM SONG
It is the autumnal mood with a difference.
OCTOBER
He sees days slipping from him that were the best for what they were.
MY BUTTERFLY
There are things that can never be the same.
RELUCTANCE
This recording may be freely downloaded and distributed, as long as Voices of Today is credited as the author.  It may not be used for commercial purposes or distributed in an edited or remixed form.
For further information about Voices of Today or to explore its catalogue please visit:
Voices of Today

Uploaded by World of Words on September 2, 2018